Select Your City Below

Second Chance Apartments Near You!

We Help You Find the Right
2nd Chance Houston Apartment.

We Eliminate the Guesswork
Saving Time and Money.

People trying to find 2nd chance apartments by themselves will encounter several obstacles. There is so much involved when looking for nearby apartments willing to accept applicants with broken leases evictions or criminal records.  Most people do not have time to search for second chance rentals that are willing to accept their applications. Individuals with bad credit, poor rental histories or criminal histories will have a difficult time finding 2nd chance leases. Overcoming bad credit, poor rental history and criminal convictions can be quite challenging. People deserve to have a quality environment. We are prepared to help you find apartments offering 2nd chance leasing that will approve you regardless of evictions, broken leases, slow pays, repossessions, delinquencies, misdemeanors and even felonies.

Fill out our request form. We’ll make your apartment locator search as stress-free as
possible and most likely save you money on your rent.

FIND 2nd Chance APARTMENTS NEAR YOU!

When signing lease agreements thoughts of facing eviction or breaking a lease seldom enters a renter’s mind. Applicants rarely anticipate encountering problems that may cause them to break their lease or having an eviction filed on them.

Before signing any lease agreement, it is highly recommended to thoroughly read through the entire document. Knowing the exact details of a lease contract is extremely important. Do not hesitate asking questions to obtain clear answers. If any change in the agreement is needed, they can be addressed prior to signing the lease contract. Sudden job relocation, military deployments, health issues, divorces and separations can often create unwanted penalties and a poor rental history.

Evictions, broken leases, slow pays, misdemeanor or felony Second Chance Apartments can find 2nd chance rentals near you. You do not need to worry about your past circumstances. We can help.

Broken leases occur when renters move out early without giving proper written notice. Lease agreements in general require 30 or 60 day notices to vacate. Renters may often believe there is something inadequate with their apartments which causes them to break their lease. It’s always best to communicate with your apartments to see if there are any remedies. Apartments often have options they can offer to keep residents from breaking their leases. Breaking a lease can significantly damage your credit score and rental history. The full amount of the lease agreement and any additional fees are often sent to collection agencies. They will report the rental balances to the credit bureaus in order to leverage debtors into paying them off. Broken lease balances are always entered into local apartment databases making it even more difficult being approved for apartment near you.

Evictions are when apartments or landlords file legal documents with the local courts requesting tenants be forced to vacate their property. Evictions are filed when renters violate lease agreements. The single most common reason is not paying rent or frequent slow pays. Lease contracts will explain in detail the options apartments and landlords may resort to if tenants are not in good standing. An eviction must be processed in a court of law by either a local judge or justice of the peace. Apartments and landlords cannot forcibly evict tenants on their own by replacing the locks on the property. A court judge must grant a writ of eviction in order for the tenant to be forcibly removed by the sheriff’s constable if necessary. An eviction will show up on your credit report as a judgement debt and on public records. People served eviction notices should always try to resolve any issues with the apartments or landlords prior to the eviction hearing. Just the fact an eviction was filed can be detrimental in your ability to rent any apartments near you in the future.

Get Started today finding 2nd Chance Apartments near you:

Complete the form on the website. Make sure all the required fields are filled out. Provide as much information as possible to save time and questions.

One of our professional apartment locators will soon be in contact with you. After a brief interview they will send you a second chance apartments list near your location.

Your apartment locator will email a selection of apartments which will include prices, floor plans, photographs, and maps of 2nd Chance apartments near you that fit your criteria.

After the list of 2nd chance apartments in your area is provided, they will discuss the next steps you need to take in making sure your application is approved.

It’s quick and so easy!

The original Civil Rights Act was passed in 1964. Four years later the Fair Housing Act of 1968 also known as Title VIII of the Civil Rights Act of 1968 was enacted by Congress. The act was created by Congress in order to eliminate prejudice and discrimination that was often being used against people because of their race, color, nationality, sex, age and religion. In 1988 the act was amended in order to protect single parents with children under the age of 18 and individuals with disabilities. Nearly all major cities in the United States have segregated their populations based upon race. The Fair Housing Act was enacted to cease the spread of segregation in the minority populations of major cities. Segregated and impoverished areas still exist to this day in America’s largest cities. Fortunately, they are not as common as they were at the time the Fair Housing Act was passed. Although no law is perfect by any means the Fair Housing Act has made a significant impact on equalizing the playing field for minorities, single parents, the elderly and people with disabilities. Most major United States cities have areas that are considered lower income. These areas are usually populated by people belonging to minorities. This is especially true for black and Hispanic people. Generations of descendants from the families can be trapped in poverty for several decades. They see no way out of this limbo. Crime rates are higher, suicide rates are higher and drug abuse is higher. Often the only things that are lower is opportunities and life expectancy. As result often broken leases, evictions are commonplace. Most are people who are living paycheck to paycheck. Loss of employment or unexpected circumstances can be devastating to people from ethnic minorities and disabilities. It’s very difficult to be a single mother and make ends meet when you’re doing it all alone. Anywhere you go in the United states women are much more likely to endure an eviction than men.

Recent historical events have caused and outbreak of broken leases, evictions and crime. All these are often fueled by the despair of poverty that’s magnified by current economic situations. This is especially true in America’s largest inner cities. This is where most minorities tend to live in America.

There are an estimated 3 million evictions in the United States each year. That’s over 8200 per day. As a result, their lives are often negatively affected for several years.  Blacks and Hispanics suffer much higher rates of evictions than tenants from other races.

Studies show nearly 5.6 per cent of Americans identify with the LGBT community. As of today there is not federal law in the United States that bars discrimination based on sexual orientation or the gender you may identify with. There are at least 22 states and many cities that have laws prohibiting discrimination of those belonging to the LGBT community. You can learn more about your rights by doing your research. There’s plenty of accessible information provided on the internet. The recognition of this segment of the American population and the rights of the LGBT communities are constantly evolving.

Our team at Second Chance Apartments supports the Civil Rights Act of 1964, Fair Housing Act of 1968 and Fair Housing Amendments Act of 1988. We do our very best to level the place playing field for people of all ethnic, sexual and religious backgrounds. We do not discriminate against single-parent families or people with disabilities. Instead we look upon them with empathy understanding they have the same rights to opportunities as every American. It is only right that we level do our utmost to level playing field and provide as much opportunity as our talented team can offer. The people who work behind the scenes at Second Chance Apartments understand that we do not live in a perfect world. But we are here to do what we can to try to make it a better for everyone. We believe everyone deserves opportunities. We believe everyone deserves a second chance no matter their race, color, nationality, gender, sexual orientation, religion, familial status and age. The people at second chance it’s is dedicated to the idea of ending discrimination of any kind. We are here to help provide a safe, clean environment where anyone can get a fresh start, raise a family and enjoy the bright future that America is supposed to provide. Our team at Second Chance Apartments will do their best to provide the opportunities you deserve. 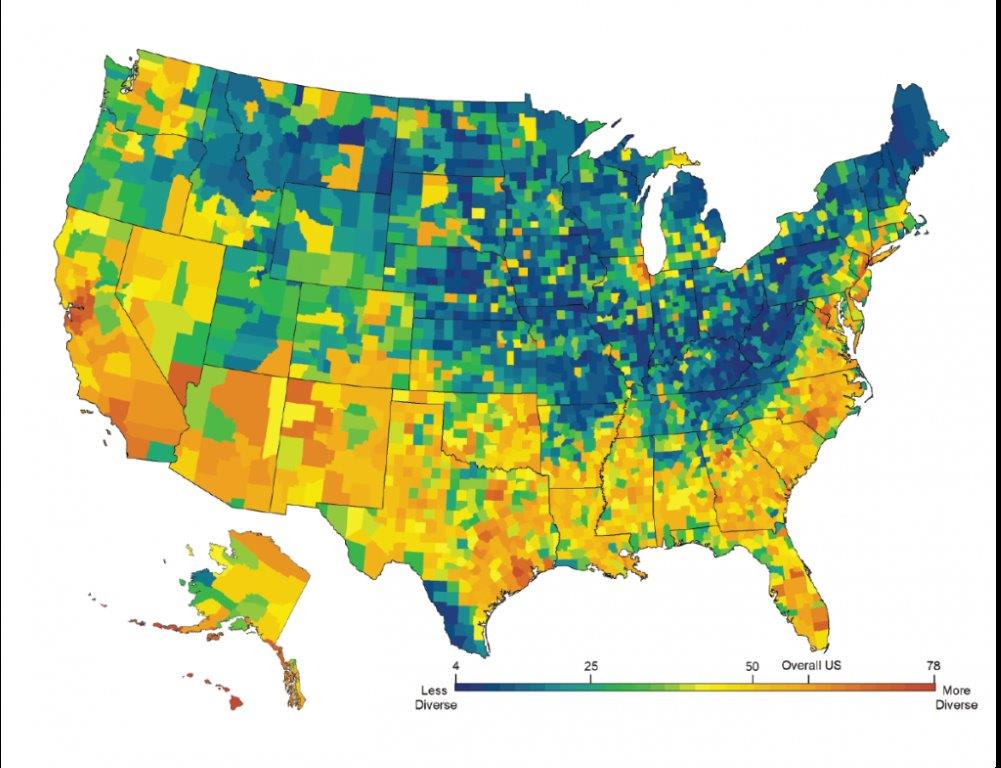 It’s hard to believe but the white population used comprise nearly 87% of the American population. The remaining part of the population 100 years ago was primarily black. The Hispanic race is by far the fastest growing race in the United States.

The term minority will no doubt have a completely different meaning by the end of this century. America is a rapidly changing society compared to others in the world. No other country in the world even compares to its ethnic diversity. The term “melting pot” is often used referring to American society.

Though the United Sates is a Republic with constitutional and civil rights, minorities still suffer persecution to a unacceptable degree. People who belong to the current minorities in the United States are more subject to poverty, criminal prosecution, drug abuse and hate crimes. Laws enacted by Congress such as the Civil Rights Act of 1964, the Fair Housing Act of 1968, and the single parent family and disabilities act of 1988 have provided much needed and significant protections in helping minorities advance in American society.

The United States is also a land where cultures often collide resulting in riots that can last days, weeks and even months.

Yet America always seems to recover from its inner differences and become stronger.

The United States is truly a grand experiment of 50 individual states all with different governments and ideas on how to govern. It’s a giant test tube of 50 state governments each trying to do their best to provide for their citizens. Sometimes they get it wrong. Eventually some of them get it right. There were always be differences between the states and the cultures within.

Minorities are often the bulk of people searching for Second Chance Apartments in any particular United States community. We are here to assist anyone we can in spite of race, sex, religion sexual orientation and age. We are only here to do the very best we can to help those who are more disadvantaged finding a safe place to call home.